Plastic waste: killer of the seas

When researchers examined the stomach contents of 13 sperm whales that washed up on Germany’s North Sea coast this year, they discovered further compelling evidence of how plastic waste plays havoc with the environment both on land and at sea.

The guts of the stranded giants were stuffed with plastic. According to the experts, the whales were probably forced into shallow waters by unusual weather patterns shifting their food sources.

After straying into the shallows, the whales could not support their own body weight; their internal organs collapsed and the creatures died of heart failure.

Plastic rubbish festoons our oceans. By 2050, it is forecast to grow fivefold to equal the weight of all fish life. And each piece of waste remains adrift for centuries.

Researchers are only beginning to realise the long-term consequences of this man-made but entirely preventable danger.
And after more than a decade of procrastination, Australia’s most populous state has pushed forward plans to tackle the recovery of empty plastic bottles. Despite industry objections over cost, NSW is joining South Australia and the Northern Territory in running a container deposit scheme. It rolls out from July next year. Other states are under pressure to follow suit.
NSW consumers will be slugged extra for plastic drink and other containers and a portion of the impost will be refunded to whomever returns them — either to a reverse vending machine or a retailer.

The anti-plastic crusade is part of a global trend. New York City council recently approved a bill to require many retailers to charge US5c for each plastic or paper bag taken by consumers at check-out counters. US cities with similar laws include Cambridge, Seattle, San Francisco and Los Angeles. Reports in the US say the addition of New York, the country’s most populous city with 8 million residents, could add momentum to the push to get shoppers to go green.

The arguments are both environmental and economic. Forces are marshalling to remake the plastics economy through greater reuse and recycling.

Earlier this year, a World Economic Forum report set out the road map for change. Use of plastics increased twentyfold in the past half-century and is expected to double again in the next 20 years. While it delivers many benefits, the plastics economy has ­obvious drawbacks.

After a short first-use cycle, 95 per cent of plastic packaging material value, or $US80 billion ($109bn) to $US120bn annually, is lost to the economy. “A staggering 32 per cent of plastic packaging escapes collection systems, generating significant economic costs by reducing the productivity of vital natural systems such as the ocean and clogging urban infrastructure,” the WEF report says.

“The cost of such after-use externalities for plastic packaging, plus the cost associated with greenhouse gas emissions from its production, is conservatively estimated at $US40bn annually — exceeding the plastic packaging industry’s profit pool.’’

The US, Europe and Asia jointly account for 85 per cent of plastics production. The Australian plastics industry, which employs 85,000 people, produces more than 1.2 million tonnes a year and accounts for about 10 per cent of our manufacturing ­activity.

In the 2012-13 financial year, Australia consumed 1.5 million tonnes of plastic — about 65kg of plastic for every man, woman and child. And about 37 per cent of this plastic was single-use disposable packaging. Only about 20 per cent was recycled.

A global war against plastic is being waged and container deposit schemes are playing their part. Plastic waste in the ocean is a high-profile issue particularly after graphic images of sea birds starving to death after ingesting plastic. A senate inquiry heard that Queensland National Parks and Wildlife Service reports that more than 70 per cent of loggerhead turtles found dead in Queensland ­waters had ingested plastic. In addition, almost a third of sea turtle deaths in Moreton Bay are attributed to ingestion of plastic.

Despite this, evidence was that the ability to assign actual cause of death to plastic ingestion is “exceptionally small”. But CSIRO is trying to estimate how much plastic will kill a turtle or a seabird.

What is known is that once plastic is ingested, animals have difficulty in ridding themselves of the debris. Many turtles have downward facing spines in their throats which prevent regurgitation.

The plastic remains in the stomach, where it blocks digestion. In addition, plastic products often decompose within the turtle, producing gas which remains trapped inside the animal. These gases cause the turtle to float on the surface, which can lead to starvation and leaves the animals prone to predation. 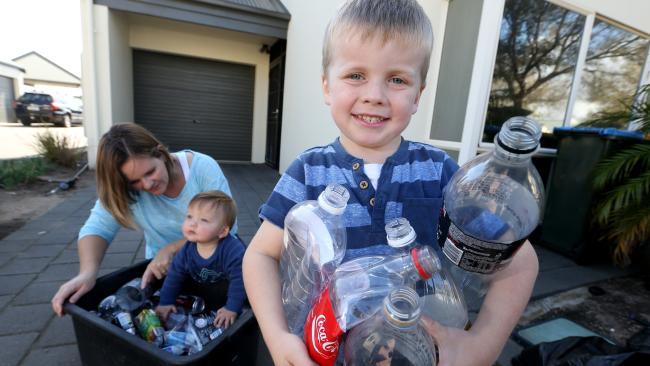 The senate inquiry said it was concerned that hundreds of species of fauna including birds, turtles, cetaceans and seals were harmed by ingestion and entanglement. It recommended the introduction of container deposit schemes in all jurisdictions.

A national deposit scheme could remove an additional 35,000 tonnes from the waste stream, says Ian Kelman, executive officer of the Association of Container Deposit Scheme Operators.

The deposit scheme in South Australia is a “cultural phenomenon” says Kelman, where “individuals … perhaps pensioners or homeless people in those areas, have an area of the state which is their turf, as they describe it”.

“It might be a couple of beaches or a few parks. That individual generally goes through the area and collects whatever empty containers they can. They obviously make some additional income for themselves.”

It has certainly turned the state into Australia’s recycling capital, and provided pocket money for generations of children since it was established in 1977.

Not everyone is happy. The beverage industry says the experience in the Northern Territory is that strangers rummaged through household rubbish bins in search of containers to redeem. It lobbies heavily against the introduction of a container deposit scheme.

The senate committee recognised the implementation of container deposit schemes is a polarising issue as the beverage industry is concerned about possible associated costs. But the committee was “somewhat sceptical of many of the 152 arguments put forward by industry”. And it did not accept the view that a container deposit scheme and kerbside recycling could not coexist.

The NSW decision to introduce a deposit scheme next year is a long time coming for Boomerang Alliance campaigner Jeff Angel. After “years of new studies, deferrals and endless procrastination” he says the NSW ­decision “opened the way to a massive and ongoing clean-up of the environment, creation of hundreds of jobs, much more recycling and tens of millions of dollars for charities’’.

With the right design features, Angel says a container deposit scheme could provide a $150 million boost to the recycling sector, attracting more than $160m in private sector investment to build 600 recycling collection points across the state.

The senate report called for all states and territories to adopt container deposit systems by 2020. ­Already, Queensland says it intends to follow the NSW lead.

There are three approaches to tackling plastics pollution, Angel says. First, ban single-use plastic bags, because collecting them for recycling doesn’t create a market big enough to cover the cost.

Second, create a business model for collection of material such as a container deposit scheme. Third, minimise packaging and increase compostable materials. Angel says such products are superior to biodegradable plastics, which break down into ever smaller pieces but are not absorbed back into the environment.

With momentum on a container deposit scheme, Queensland, NSW and Victoria are discussing a joint approach to single-use plastic bags. And the commonwealth and states are discussing micro beads, tiny grains of plastic found in cosmetics that wash down the plughole and never degrade. Federal Environment Minister Greg Hunt says if an industry program to phase out micro beads is inadequate he will legislate next year.

Industry organisation Plastics Europe warns, “There is an increasingly negative perception of plastics in relation to health, environment and other issues”.

The plastics industry could face a campaign from conservation groups similar to the one raging against the fossil fuels industry.

The vision of the New Plastics Economy is that plastics never become waste; rather, they re-enter the economy as valuable technical or biological nutrients.

The World Economic Forum report says many innovations show potential, but to date these are too fragmented and uncoordinated to have impact at scale.

But the consumer and political tide is shifting globally against plastics and the industry is under pressure to speed its transition into the new plastics economy.

The task is enormous. The Total Environment Centre says we use more than 5 billion plastic bags each year and the amount of bags entering the litter stream each year is likely to be at least 100 million bags.